The City of Tampa is making transportation improvements along Central Avenue from just south of Osborne Avenue to Hillsborough Avenue based on survey responses from Seminole Heights residents, business owners, and parents of students at Hillsborough High School. 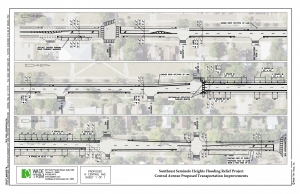 Additionally, the curb on the east side of Central Avenue between Hillsborough and Giddens will be moved east two feet into the City right-of-way beginning at Hillsborough Avenue and tapered back to its current position at Giddens Avenue. This will widen the intersection to allow for a bicycle lane while retaining reasonable lane width for the through-traffic and turn lanes.

Construction will occur in conjunction with the Southeast Seminole Heights Flooding Relief project to maximize cost efficiencies while minimizing disruption to the community.

Click here for road closure information, other alerts and to opt-in for future email updates.