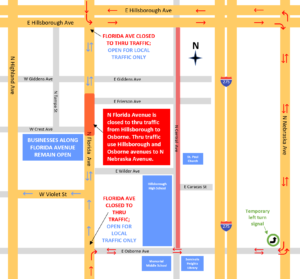 The City of Tampa is installing a temporary left-turn signal on eastbound Osborne Avenue at Nebraska Avenue to assist traffic during the North Florida Avenue closure.

In anticipation of the added traffic caused by the North Florida Avenue closure and detour, the City of Tampa is installing a temporary left-turn signal at the intersection of eastbound Osborne and Nebraska avenues. The temporary signal will assist traffic turning left (northbound) onto Nebraska Avenue from eastbound Osborne Avenue during the North Florida Avenue closure, which begins Aug. 22 and will last for at least three weeks.

The Florida Department of Transportation (FDOT) has previously conducted a left turn study and found the intersection does not warrant a protected turn signal under normal circumstances but both FDOT and the City recognize the added traffic during the detour will benefit from a dedicated turn signal. Once North Florida Avenue opens again and the detour is removed, the turn signal will be removed.